How can we help you today?

What is a VPN?

There are two parts to our VPN feature:

Prevent DDoS attackers from holding your game or stream hostage by rapidly and easily applying a VPN to any device, including your console, tablet or smartphone:

How will this benefit me?

A major issue for gamers and streamers are DDoS attacks. These are used by malicious users to disable your connection.

A DDoS attacker is only able to target you if he knows your ‘IP address’. Your IP address is the Internet’s equivalent of your home’s postal address.

A Virtual Private Network (‘VPN’) has been used for many years to hide IP addresses. When a VPN is applied, an attacker can only target your VPN server’s IP address. This ensures that your home connection is unharmed.

Before NETDUMA, enabling a VPN almost always required you to install software. This means that applying VPN on any device other than a PC or a laptop was only within the reach of those with considerable networking knowledge.

The NETDUMA router now gives a regular user the same level of power, allowing you to easily and rapidly apply VPN on any device.

This freedom means you can choose the devices that want to be protected. For example, let’s say you have applied VPN to your console but you have left your PC outside of the VPN. If your console’s IP address is compromised then an attacker will only be able to disable your console. Your PC will be unharmed and you will be able to get your console quickly back online because switching VPN servers is so easy. Here is an illustration:

In this particular example, a streamer will be able to continue his stream even if his console is attacked, meaning he can continue to interact with his viewers whilst he reconnects his console.

NETDUMA do not place any restrictions on the VPN provider you wish to use and you can also apply your VPN service to multiple devices at the same time.

The ease and flexibility of our VPN option has made a huge difference to some of the biggest streamers on Twitch.tv, allowing them to quickly recover from DDoS attacks without their streams ever being forced to shutdown.

There are three points you will need to consider:

If you are not at risk of a DDoS attack then it is unlikely you will need to use this particular feature. If you are at risk then you will not find any router which makes applying a VPN on a console this straightforward.

Other uses for a VPN include anonymity/privacy online, getting around region locks and for business use.

VPN-Hybrid fully protects your PC game or your stream connection from a DDoS attack and, unlike a typical VPN, it will not add any lag or reduce your bandwidth:

How does it work?

A VPN is used to mask your home’s IP address from a DDoS attacker by routing your Internet traffic through a server. So in the event of an attack your VPN server is hit instead of your home’s connection, meaning you can quickly change servers and carry on gaming / streaming. 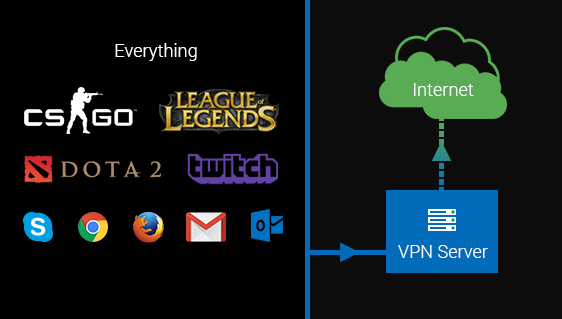 But there are downsides to this. When the server goes down, so will your game and stream. And to make matters worse, VPN servers are often laggy and have low bandwidth because you are connecting indirectly and sharing with lots of people. So it’s not the perfect solution.

The VPN hybrid feature solves these problems. Using a NETDUMA router, you can send all the traffic you trust through your normal connection, and everything else through a VPN: 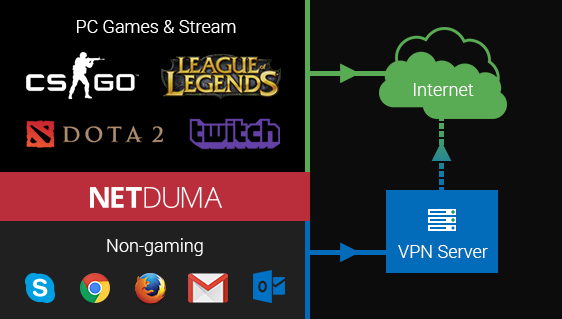 Game servers and twitch servers are trustworthy, but other traffic can be compromised e.g. Skype, so this means when an attacker tries to hit you offline, your VPN will go down, but your game and your stream will be completely unaffected. If used correctly, this makes it impossible for an attacker to take your game or stream down.

And if that wasn’t already good enough, because your game is on your normal connection, it is not going through a VPN server, meaning you don’t have any additional lag or limits to your bandwidth.

This is extremely simple to do, even our Mums could do it. We have demonstrated VPN-Hybrid working in this video:

VPN services require a subscription to a VPN provider. A Google search will yield many companies that offer VPN services. The average price is around $5-$12 per month. Your VPN supplier must be OpenVPN (most of them are)

This feature is a must have for any serious PC gamer and streamer. Make sure you check out the NETDUMA R1’s other features that will transform your Internet connection.

Did you find it helpful? Yes No

Send feedback
Sorry we couldn't be helpful. Help us improve this article with your feedback.